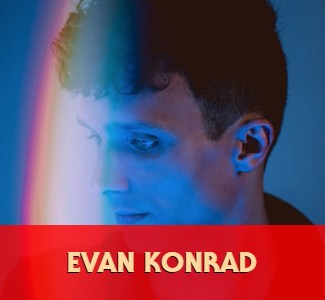 Evan Konrad sonically architected an alternative world all by hand.

Born and raised in Abbotsford, BC Canada, the singer, songwriter, producer, and multi-instrumentalist devoted his entire life to crafting music. Growing up in a house where creativity would be encouraged at every turn, he spent countless hours writing songs and producing. Following stints recording and on the road with other artists, he locked himself away in the studio and commenced work on what would become his forthcoming debut. With nothing more than a few songs on his private SoundCloud link shared by his manager, he caught the attention of LAVA founder Jason Flom who signed him on the spot—because of the downright mind-blowing songcraft.