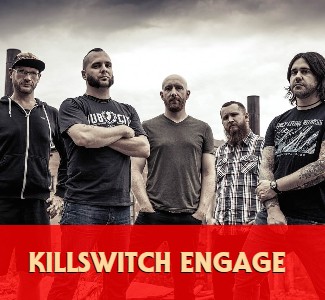 American metalcore outfit Killswitch Engage were at the fore of the early-2000s metalcore wave, achieving chart success and garnering Grammy nominations while selling millions of records. Forming Killswitch Engage in Westfield, Massachusetts, the band's four founding members already had strong fan followings when they got started. Bassist Mike D'Antonio was formerly the leader and principal songwriter of Overcast, often considered a progenitor of the metalcore genre. When Overcast split in 1998, D'Antonio sought for a year to find the right combination of players to fuse hardcore and metal with melody. During the summer of 1999, D'Antonio connected with Adam Dutkiewicz, who was the drummer for Aftershock, and Joel Stroetzel, Aftershock's guitar player. After Jesse Leach -- vocalist for Corrin and Nothing Stays Gold -- joined, the foursome took the name Killswitch Engage.