Here's what a grown-up Beavis and Butthead will look like in the upcoming Paramount+ movie. 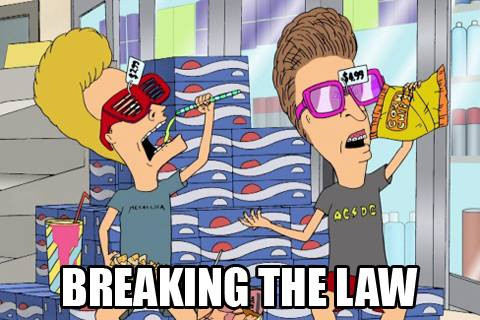 "In perhaps the dumbest space movie ever made, Beavis and Butt-Head are sentenced to Space Camp by a "creative" judge in 1998. Their obsession with a docking simulator (huh huh) leads to a trip on the Space Shuttle, with predictably disastrous results. After going through a black hole, they reemerge in our time, where they look for love, misuse iPhones, and are hunted by the Deep State. Spoiler: They don't score."

Animated metalheads 'Beavis And Butt-Head' are set to return this year for a second feature-length film. Creator, Mike Judge, has confirmed his plans to release a new movie featuring the pair via the Paramount+ streaming service sometime "soon". A tweet shared on January 4th by Judge revealed middle aged versions of the film's stars

"Beavis and Butt-Head will be returning this year with a brand new movie and more on Paramount+. No exact date yet, but soon. They need some time to get back in shape"... As for the movie "I've got some ideas. I think it would have to be something that makes it relevant today. I think I might've figured out a way to do that. "

Beavis And Butt-Head originally aired between 1993 and 1997, and was brought back again in 2011 for one season. In July of 2020 it was announced that Comedy Central had picked up the animated series for a two season order, marking what would be its third revival. Thus far it has yet to air.

Beavis and Butt-Head will be returning this year with a brand new movie and more on Paramount+. No exact date yet, but soon. They need some time to get back in shape. pic.twitter.com/tN5rePP9Kn

Five Finger Death Punch dropped the video for “Darkness Settles In” It has exclusive first look footage from ’The Retaliators’ movie which the band appears in too!