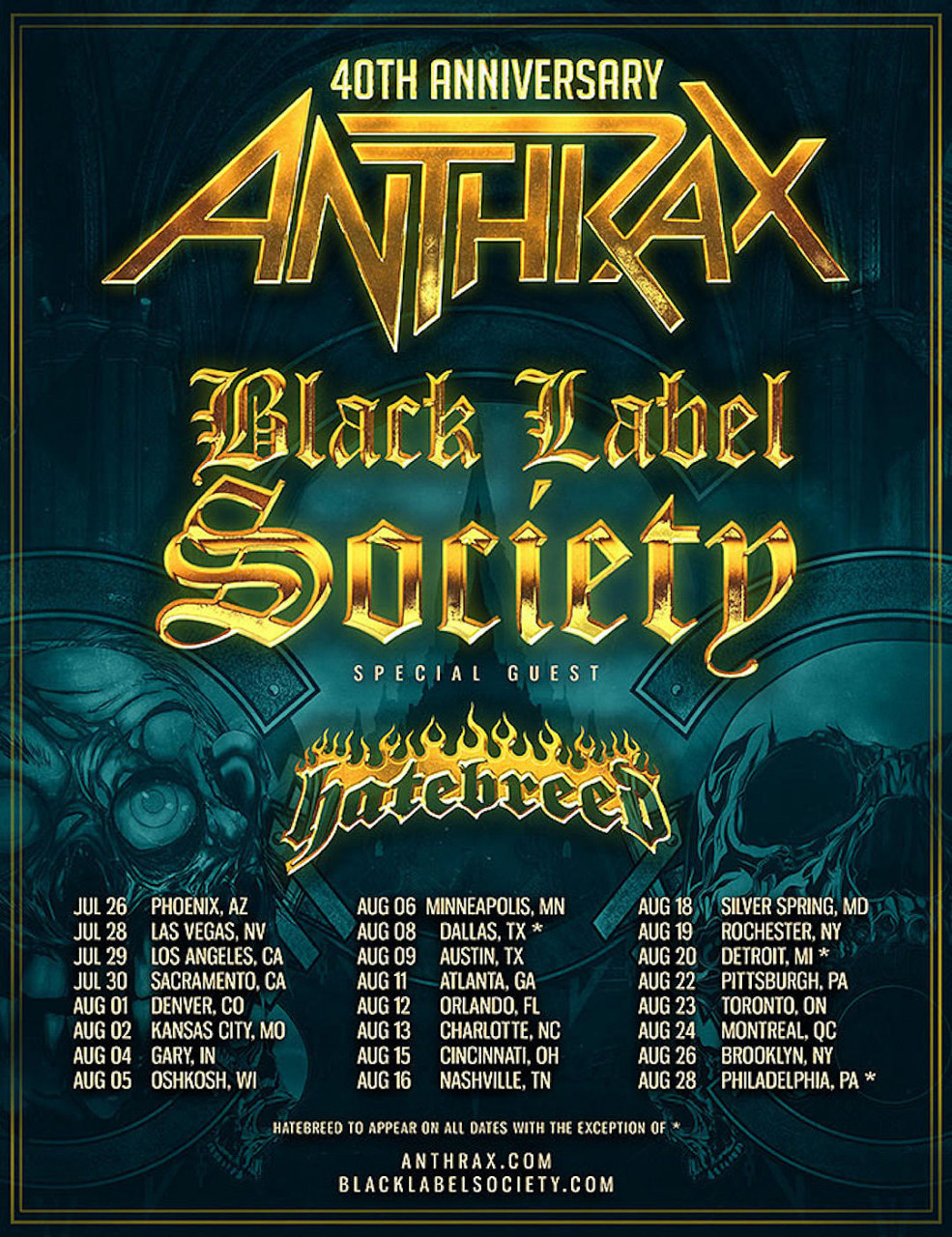 This summer, Anthrax and Black Label Society will bring some of the finest thrash and heavy metal to 24 North American cities. Both bands will play headline sets. Hatebreed, celebrating the 20th anniversary of the Perseverance album, will Special Guest. Black Label Society and Anthrax have shared festival stages and one-off shows numerous times, but this marks the very first time these two bands will tour together. Ticket pre-sale details are below.* The public ticket on-sale starts this Friday at 10:00 AM local time. Log onto https://www.anthrax.com/tour or http://blacklabelsociety.com for all ticket purchasing information.

"Zakk has been a friend and an inspiration to me as a guitar player, songwriter, and beard grower since we met in 1988. We've had the privilege to share festival stages with Zakk and BLS around the world, and it's always been a head-banging mutual admiration society between the two bands. Now we get to share the stage every night on what is easily going to be the heaviest tour of 2022 - the ultimate pounding one-two combination of bands. Oh, and did I mention we've got fucking Hatebreed with us as our special guests? Holy crap, it's going to be the night of 1000 crushing riffs. I can't wait to see you all on the road." -Anthrax's Scott Ian

The multi Gold and Platinum, six-time GRAMMY-nominated Anthrax spent a good portion of 2021 celebrating the band's landmark 40th birthday. The card-carrying Big Four members' anniversary was the subject of an 11-week series of video testimonials from artists like Chuck D., Dave Grohl, Dave Mustaine, Kerry King, Norman Reedus, Rob Zombie, Robert Trujillo, Slash, and others. Anthrax teamed up with Z-2 Comics for the "Among The Living" graphic novel that was inspired by their landmark 1987 album and released their high-end bourbon whiskey, "Anthrax XL." But, due to COVID, the one thing Anthrax couldn't do, was tour, tour, tour, so the band fully intends to extend the celebration with this North American trek. Fans can expect Anthrax - Joey Belladonna/vocals, Scott Ian/rhythm guitar, Frank Bello/bass, Charlie Benante/drums, and Jon Donais/guitar - to draw from all four decades – fan favorites and deep cuts – for their nightly setlist.

Everything about Black Label Society begins with the riff from their debut studio album, Sonic Brew (1999), to their critically-acclaimed eleventh studio album, Doom Crew Inc. (2021). A dedicated disciple of Zeppelin, Sabbath, and Deep Purple, frontman Zakk Wylde looks to the massive guitar hooks in classics as guiding lights. Their latest album,Doom Crew Inc., finds larger-than-life guitarist Zakk trading solos and twin-guitar parts with guitarist Dario Lorina, backed by the rumble of longtime bassist John "J.D." DeServio and powerhouse drummer Jeff Fabb. The GRAMMY-winning frontman has been featured on the cover of Guitar World more than a dozen times in recognition of his work on multi-platinum albums with the iconic Ozzy Osbourne and two decades with Black Label Society, and their chart- topping albums and singles. The stomping, heavy bluesy, recklessly unhinged hard-rock-metal quartet are part invading horde and part traveling carnival, summoning caffeine-fueled cacophony on records and the stage.

Hatebreed remain one of the most relevant and impactful acts in the hard rock and metal scenes. The Connecticut band is celebrating over 25 years of ruthless breakdowns, pit-stirring anthems, and poignant lyrics across eight albums and consistently sold-out shows. The band, which has gone from playing basements and backyards to being a featured worldwide attraction on countless festivals and high-profile tours from OzzFest to Warped Tour to Download, recently released Weight of the False Self, via Nuclear Blast. Weight of the False Self and Hatebreed were described by Forbes as "more relevant than ever in the metal and hardcore communities." It was also praised as a "return to their hardcore roots" by Brooklyn Vegan. The album was deemed "one of their most aggressive to date" by Consequence and "pummeling" by Revolver, while Psychology Today called it "a blazing combination of extreme metal and hardcore punk." Hatebreed, nearing a quarter of a billion catalog streams, continue to be one of the most vital bands in the hard rock scene.

"Listen up! It's gonna be a hot summer! Anthrax, BLS & Hatebreed will be on your case, in your face & ready to kick you and your father back in place! See you in the pit." - Jamey Jasta

Dates for the tour are as follows: 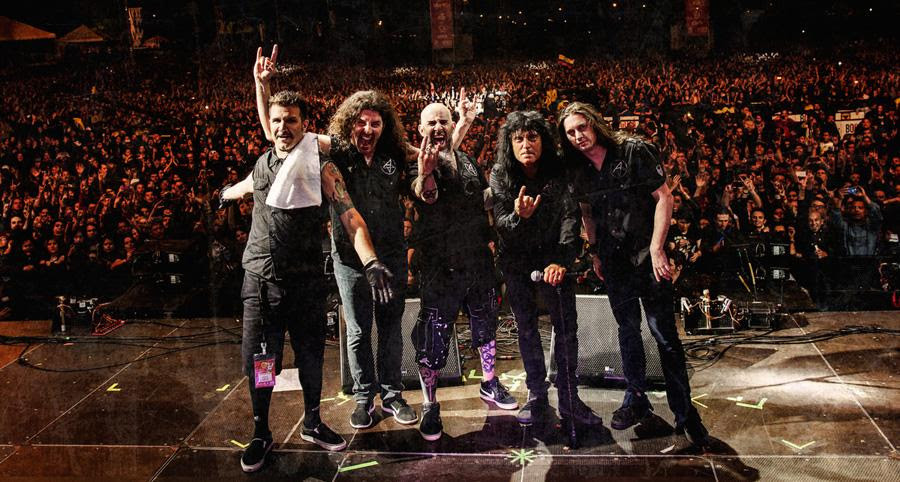 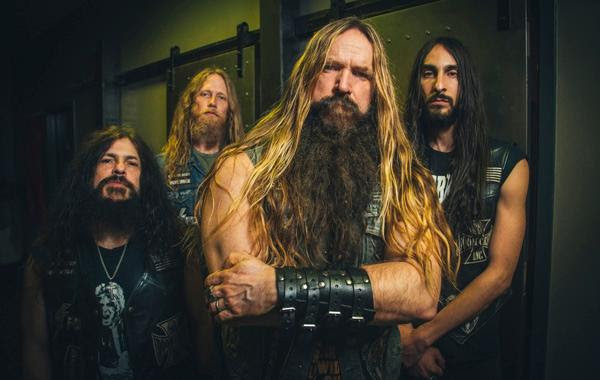 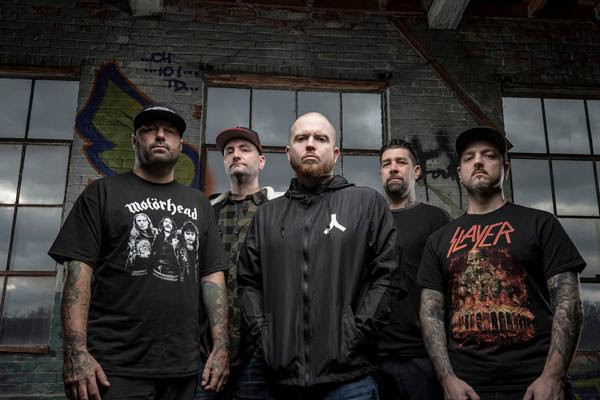