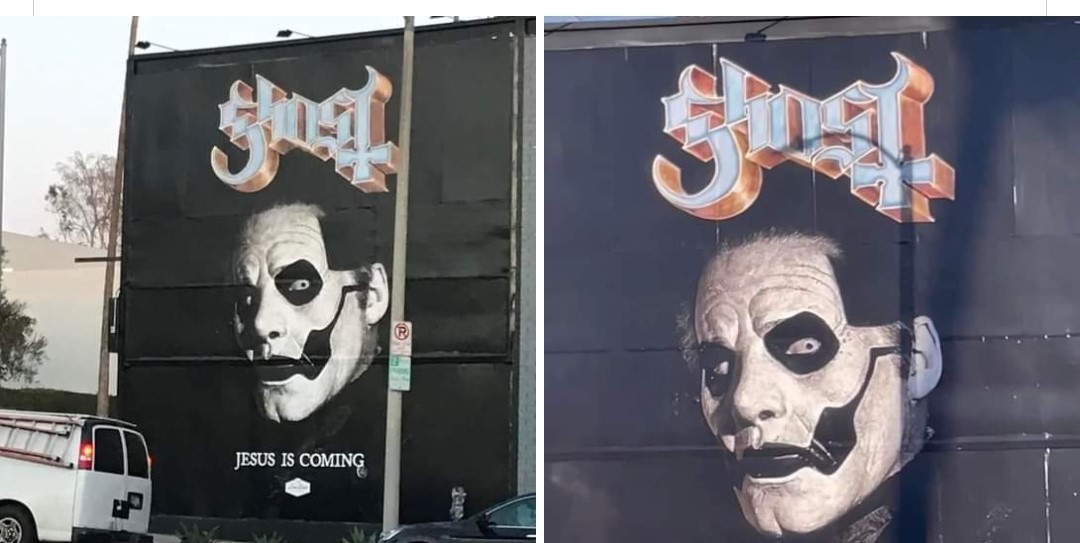 Ghost appears to be hinting at an upcoming project. Eagle-eyed fans noticed that a billboard featuring frontman Tobias Forge recently popped up in Los Angeles. It also contained the phrase "Jesus is coming." It's currently unclear what the band could be hinting at, but it does follow a November 2022 interview with Rolling Stone where Forge discussed the "vibe" of Ghost's next album. Their most recent album was "Impera" released in March 2022.

"Impera was my favourite rock album of 2022 … I found out along the way that Tobias is a bit of a fan of DL, so I guess it was inevitable we'd both find out about each other! Once we'd been introduced to the idea of working together it just snowballed organically & I'm thrilled that I got to sing on what is my favourite song from that album!" - Joe Elliott of Def Leppard

Check out the hilarious teaser video and then the Audio/Video of Ghost's "Impera" single "Spillways", featuring Elliot on guest vocals.

Ghost are planning to celebrate their fictional late 1960s run with a new exhibition at the Whisky a Go Go in West Hollywood, CA this Wednesday, February 01st. If you're not up to date on the band's canon, a young Papa Nihil fronted Ghost in the 1960s, with their 2019 "Seven Inches Of Satanic Panic" representing that time period.
As fate would have it, the b-side from that release, "Mary On A Cross", would find find viral fame on TikTok, subsequently going gold in the United States late last year. Ghost themselves had recently been teasing that "Jesus is coming", and it would appear that this is may have been the resurrection they were referencing.