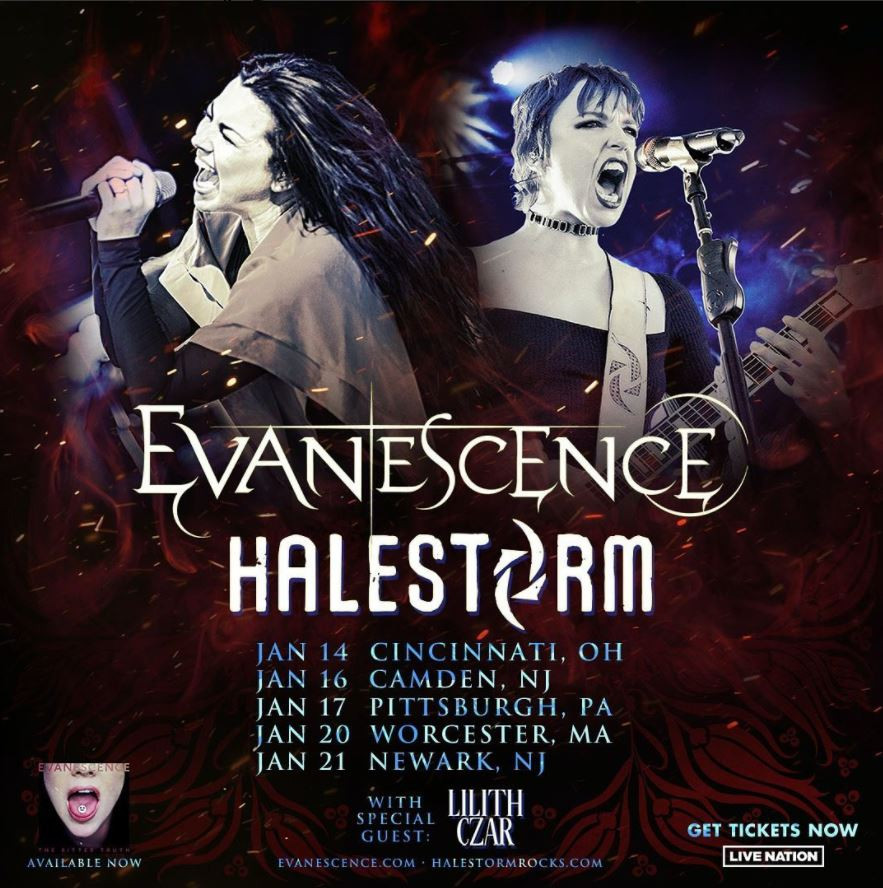 Evanescence and Halestorm had to postpone their Fall tour because it was "hit by Covid". The tour was originally scheduled to stop at the Heritage Bank Center in Cincinnati on December 12th but it has been rescheduled again.

The new date is Friday, January 14th. They posted on social media saying, "We have unfinished business! Can't wait to come back in January!"
Halestorm just finished working on their new album so maybe that'll give them some time to rehearse some new stuff!
If you're a ticket holder for the original date at The Heritage Bank Center in Cincinnati, your tickets are still good for the new date, January 14th.
You can still buy tickets through ticketmaster.
1212 Hits
Tags:
Halestorm Evanescence Tour News
Tweet
1212 Hits 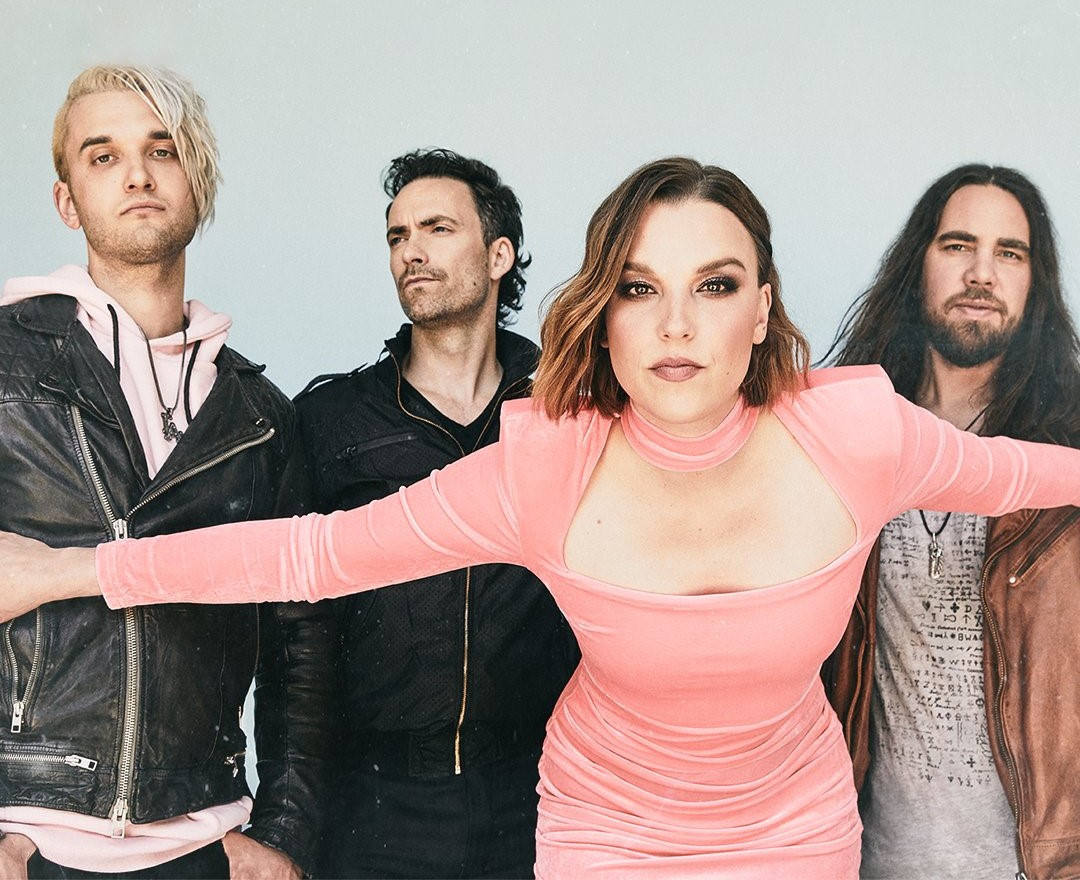 "Back From The Dead" IS NOW AVAILABLE HERE! Halestorm spent the last few months recording its new album for a tentative late 2021 release.
"Up from the dirt I rise. It'd be so much easier to just sink into the hole that I have dug for myself, the grave that this world, broken trust, guilt, toxic relationships, pressure, anxiety and depression have helped me create. But that's not who I am. Is it harder to pick myself up and out of the blackness that sometimes plagues my mind? Yes. But no one ever said being your best self is easy.
Self love is a full time job. And as always, music comes to the rescue. My words and messages in my songs that I've been so lucky to have unleashed for others empowerment… is also my empowerment. It is my life light, providing my nutrients from a muse on high, a fickle but gracious muse that enables me to balance my emotions, and manifest my destiny.
It reminds me how to love, and who looks back at me in this house of mirrors. A reflection sometimes bent, but never broken. Through music we heal, and rock forward, knowing that we are not alone on this journey. With horns raised, we march through the quicksand, and together we make it to the other side, hell cannot hold us down"
- I hear you, I see you, and I love you, Lzzy
Halestorm touring plans include:
9/12 Mansfield, OH – Inkcarceration Music & Tattoo Festival at The Ohio State Reformatory

Up from the dirt I rise.

It’d be so much easier to just sink into the hole that I have dug for myself, the grave that this world, broken trust, guilt, toxic relationships, pressure, anxiety and depression have helped me create.https://t.co/MMYD2VJYX7 pic.twitter.com/LrEIIzkrat

Evanescence & Halestorm are Teaming up to tour the U.S. this fall and there is an Ohio date! 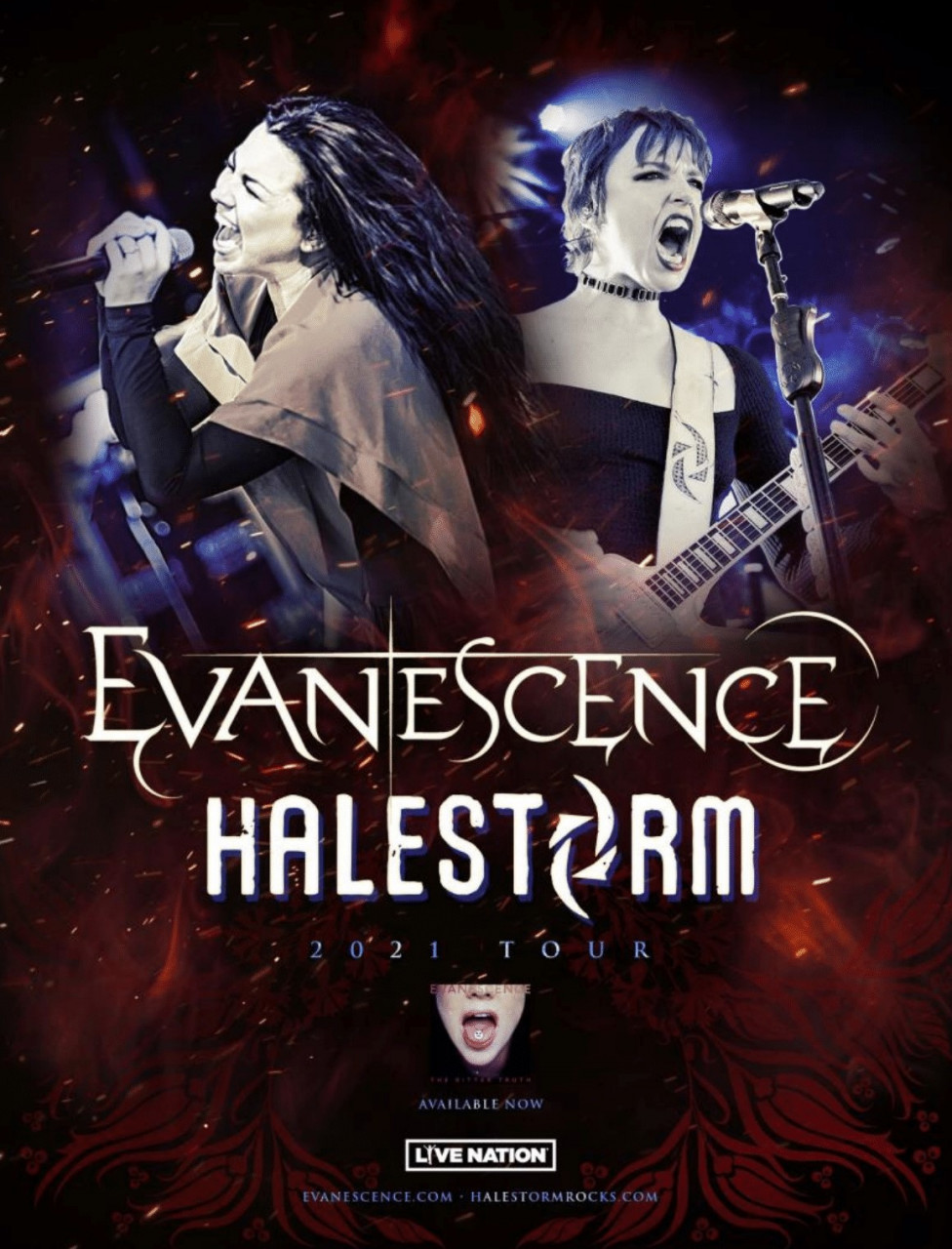 Evanescence and Halestorm will start things off in Oregon on 11/5 and will wind into Cincinnati Heritage Bank Center on 12/12 (fingers crossed for additional dates) Tickets go on sale to the general public this Friday, May 14th, at 10am through livenation.com. A special fan pre-sale will be made available exclusively to the bands top Spotify listeners ahead of that on May 12th.
https://www.livenationentertainment.com/
From Halestorm... We're coming for you this fall with Evanescence. Pre-sale kicks off TODAY, 10am local. The passcode "UNCOMFORTABLE" gives you first access to VIP packages, soundcheck access, band q&a, and loads more. Tickets on https://halestormrocks.com

"Words can't express how excited we are to go back on tour with our friends and rock out again. We've been building this new music in isolation for over a year and dreaming of what it will be like to finally play it live, and to experience it together with our fans for the first time. We can't wait to see you there!" - Evanescence frontwoman Amy Lee

"We have all been mourning the loss of live music, and patiently waiting, looking toward an uncertain future. Finally the future looks bright and I can't think of a better way to break the silence than with our dear friends in Evanescence. I can only imagine how it will feel to step on stage again night after night, and reconnect with all of the fans whom I've missed so much. Get ready for intense emotions, loud performances, and a newly exhilarated energy unlike any tour we've experienced in the past. Looking forward to seeing you all!" - Halestorm's Lzzy Hale 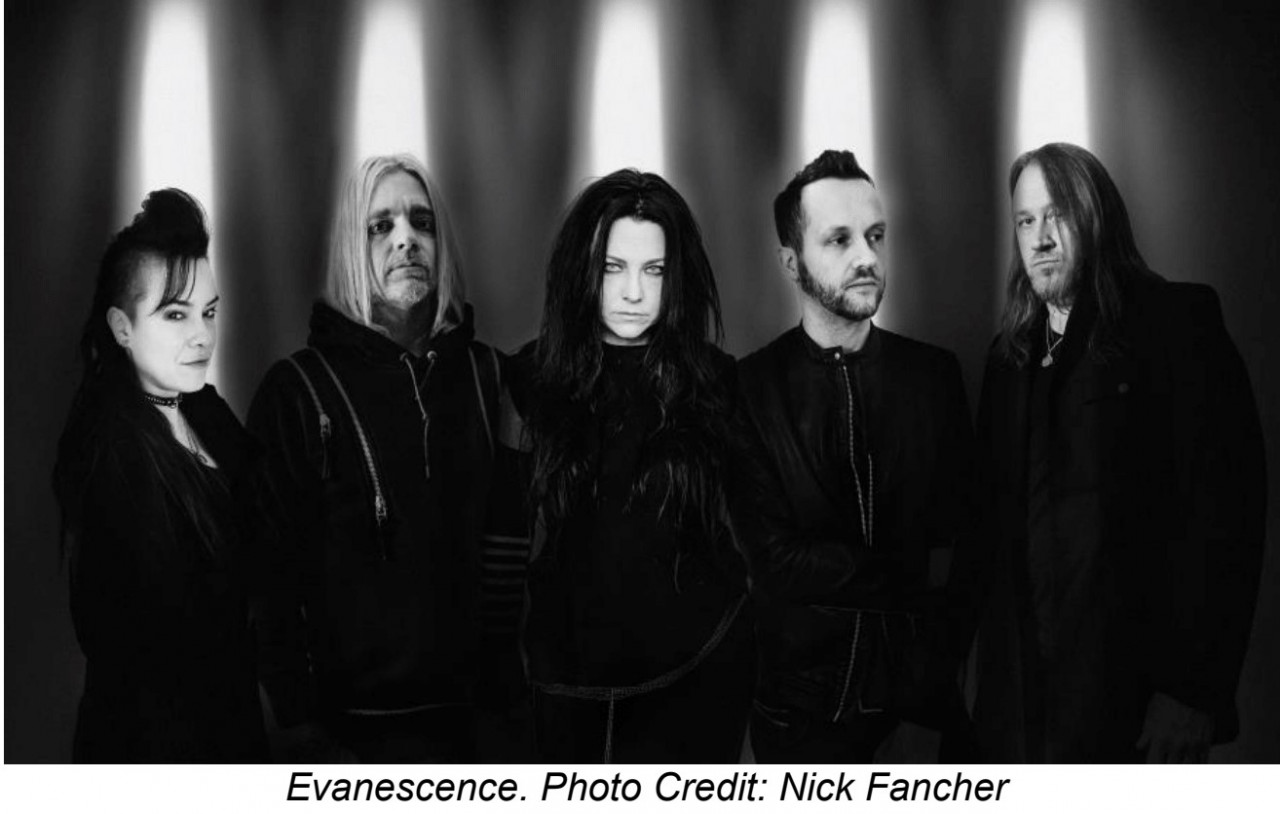 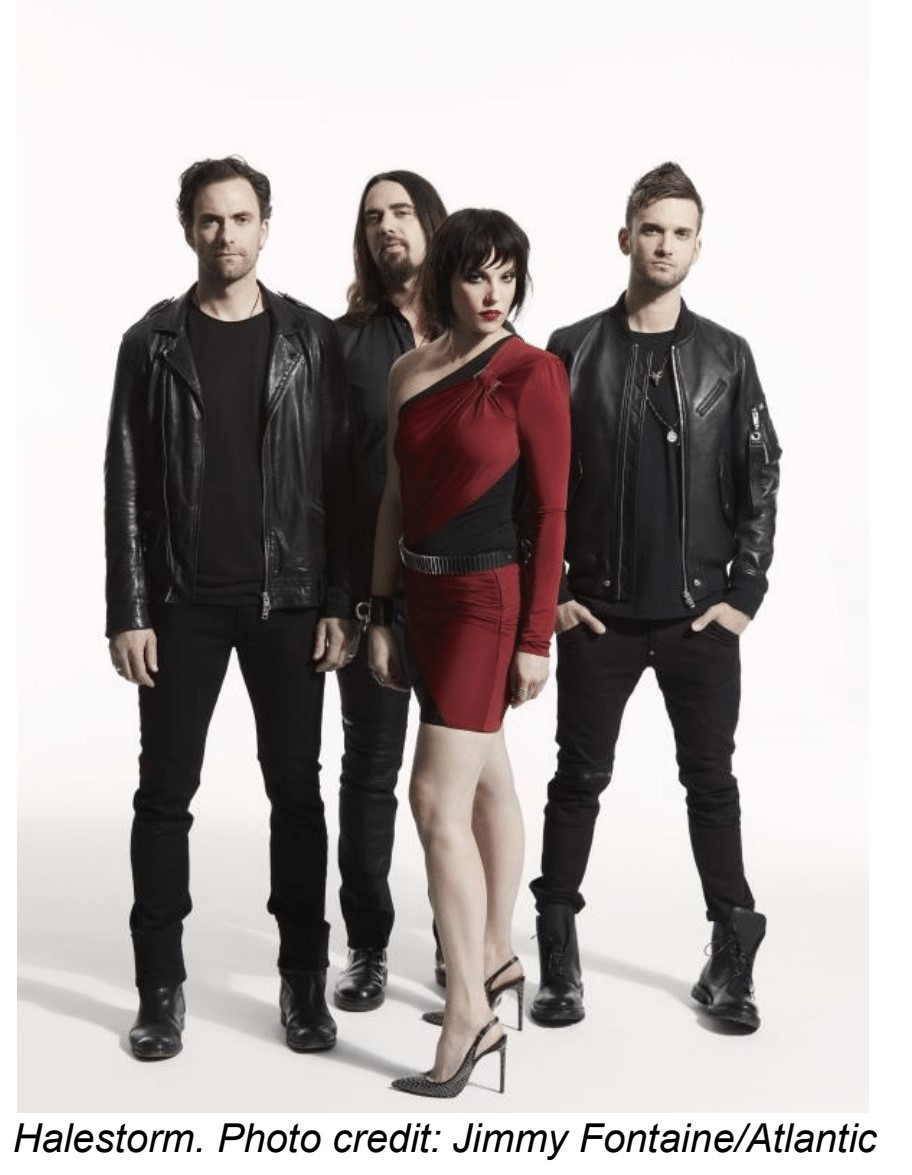 The song was written by Fil Eisler, Taylor and Ian. Check out the end credits of the film for proof! The movie and soundtrack premiere on April 9th.

"One of the great things about scoring movies is that I get to play in a lot of different musical sandboxes and occasionally the opportunity comes up to invite in some special guests. Anthrax and Slayer played a huge part in my childhood and I've been a fan of both Corey [Taylor] and Lzzy [Hale] for years, so when the idea of doing an orchestral metal score came up, it was a perfect excuse to go straight to the source. Why fake it when you can work with the real originals! It was honestly one of the most outright fun experiences of my scoring career so far" - Fil Eisler

"It was awesome to work on this track with Lzzy and be a part of the film Thunder Force. It is always nice to be creative and work with other artists in the community, especially during this extended time at home. I'm excited for everyone to hear the song and see the film!" - Corey Taylor

"I'm beyond excited to be included on the Thunder Force soundtrack, surrounded by friends, representing the genres I love so much, Rock and Metal! You won't know what hit you! Remember, LIGHTNING NEVER STRIKES IF YOU CAN'T FORCE THE THUNDER!" - Lzzy Hale

"I have had the privilege of working in the music industry for over 35 years. There is something incredibly exhilarating about performing on stage, specifically the edge that comes with the off the rails style of music I play. Working with Fil Eisler on Thunder Force somehow captured that same feeling. This score is a powerful musical engine. It was a pleasure to be a part of the team that helped this come to life." - Dave Lombardo
In a world where supervillains are commonplace, two estranged childhood best friends reunite after one devises a treatment that gives them powers to protect their city. Check out the trailer below!!  https://www.netflix.com/title/81079259
1593 Hits
Tags:
slipknot Stone Sour Halestorm Slayer Netflix
Tweet
1593 Hits

Apparently he really liked the heels Lzzy Hale was wearing while they were working together in NEW ZEALAND so Lzzy sent him a pair.
He said he had no clue what the package was and was so excited when he saw "those spectacular heavy metal heels''!
He said Hale wrote him a really sweet note and told him to have fun with them.
I love this so much!
1738 Hits
Tags:
Halestorm Lzzy Hale Rob Halford Judas Priest
Tweet
1738 Hits
Previous     Next
1 2 3